Like the former flights, this one also uses a special U3S firmware version on an Arduino Nano board.

Four reports were received from S20 on 12'th and 13'th of November. Two were the first (ordinary) WSPR message, two were the telemetry. The telemetry messages were on the correct frequency, correct time, had consistent data, and both indicated the same 5th & 6th Maidenhead locator and Altitude. We can therefore conclude with certainty that these are actual reports of the S20 balloon, not noise decodes.

The map below shows the landing subsquare EM97SI, in Virginia, US. S20 reports its altitude is 980m. The satellite image below shows EM97SI, and contours drawn at 940, 980 and 1,020m. The pale white-ish parts of the image are everything below 940m. The green parts of the image are everything above 1,020m. The altitude of S20 is reported as 980m (resolution is 20m). So S20 lies on the 980m contour, the boundary between the pale white-ish area and the green area.

Since S20 flew in from the North (top of the subsquare), it probably must be sitting on the red line along the ridge in the North West corner of the subsquare, indicated "Probable landing". To reach any of the other areas at 980m altitude, it would have had to fly over higher altitude areas. But S20 was landing. So it seems less likely. Anything could happen, with wind gusts and who knows what was happening - it depends on the horizontal speed and vertical descent speed of S20 at the time. Which we don't know, because it was night. So this is all speculation. But if I was a balloon hunter (with good climbing and walking boots) then that ridge is the first place I'd start to look. 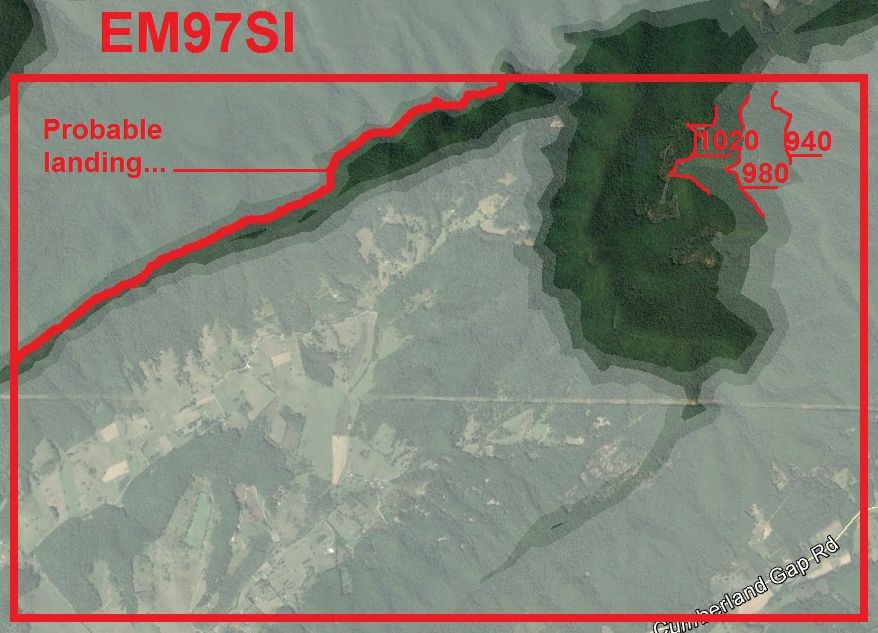 Here are some more images of the landing area, and the telemetry graphs from S20's short flight.

There was trouble with the 20m wire unfolding properly during the launch, so the 20m efficiency may be impaired on this flight. Otherwise it was a successful launch - though Dave says the wind was supposed to take S20 out into the Atlantic, not South over the US!

Dave later added an 8th solar cell to increase the voltage a little, to help cope with lower angles of sunlight and short winter days.

Flight S20 doesn't include any PA transistor and the power output is therefore under 20mW. Without the heating from the power transistor, the reported temperatures are noticeably lower.

Click for Dave's notes on the Tripole Antenna (PDF)