This 10W HF Linear Power Amplifier kit has no Surface Mount Components (SMD) to solder. There are a number of small transformers to be wound, and assembly requires care and patience.

The push-pull driver stage uses two BS170 transistors in the amplifier design used in the SoftRock transmitter stage. The final uses two IRF510 transistors in push-pull. Yes, this humble low-cost MOSFET really is capable of excellent performance all the way up to 10m band and beyond! Short lead-lengths and PCB layout are extremely important, they are the key to success.

This is an A4-size document, to print on letter size paper select "Fit to page" option in your print dialog box.

The following tests were undertaken by Allison KB1GMX on a production unit. They have been reproduced on three different kit assemblies. In all of the tests, there were no failures of components and no degradation of performance. 2) Operation at full power into open output, shorted output, 20-foot long open cable, open cable with short – all with no oscillation or damage

5) With sufficient drive, the amplifier is capable of producing 20W output at 13.8V supply using +15dBm input, over the range 3-30MHz

9) Operated at full-power continuous key-down, 100% duty-cycle for 1 hour, without damage or degradation in performance.

Geoff GI0GDP has measured the IMD performance of this Linear amp on 20m (14MHz) at full power 10W PEP output and found it to be very good. Geoff's test set-up:

The attenuation and reference level are set such that the two line (-4dBm shown) of the spectrum analyzer represents full power 10W PEP.

IMD3 is -30dB and IMD5 is -45dB relative to 10W PEP. Higher order intermodulation products are also seen to fall off steeply which is another important good characteristic. 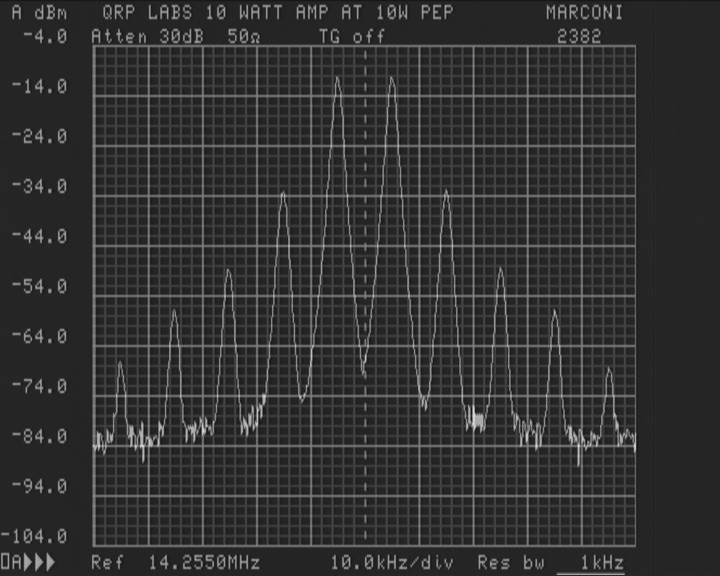 Geoff also reduced the drive from 13mW to 7mW, producing 6W PEP output; this image is shown below. Now IMD3 improves to -32dB and IMD5 improves to -48dB. 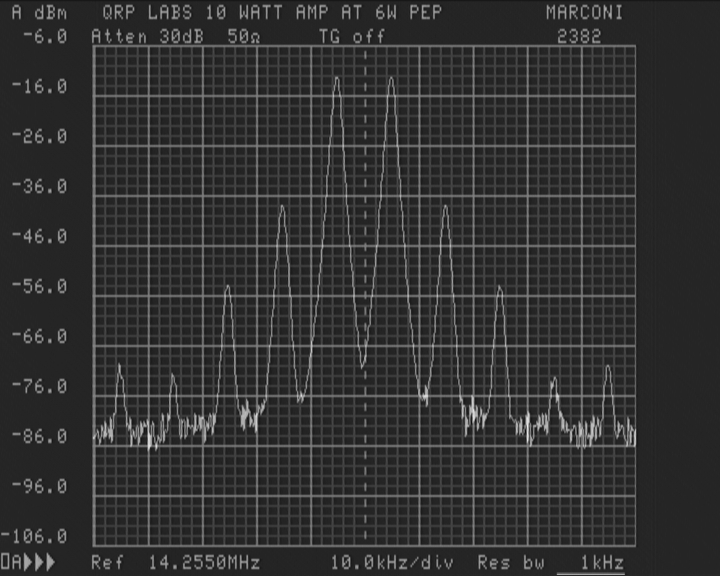 3) Inserting a 3dB attenuator at the input, cuts the output from 10W to 5W - as would be expected, another indication of good linearity.

Fred's measurements show input impedance peaking at over 400-ohms in a quite narrow around 60m and 40m bands; dropping nearer to 50-ohms at the extremes (160m, 10m). Practically speaking the impedance variations will not usually be a problem for a 50-ohm pre-driver stage output. The SWR will be high but this is not likely to be of any importance at such low powers. If worried about this, just put a 75-ohm resistor in parallel with the 10W HF Linear PA input. That will reduce the amp gain by a few dB but give a flatter SWR, if you care.

"The signal generator is set for +10 dBm in, 12 volts supply, about 4 watts out. Terminated into a 40 dB attenuator before going to signal Hound SA44B spectrum analyzer. Attached files are just a look at the main carrier, the phase noise and lastly the harmonic content."

Note: Far right graph, this is the phase noise of the signal generator (Rigol DSG815). Next right, at the output of the Linear PA module, indicating no noticeable additional phase noise generated.

Note: On the harmonic content graph, 2nd from left, I have added combined two graphs from Fred. I have put the signal generator harmonic plot by itself (no amp) shown in RED. The output of the PA is shown in black. Note the low second harmonic at -38dBc as expected from the push-pull transistor configuration.

Low Pass Filters should always be used following any amplifier, even a linear. Filtering however, is less critical than it would be on non-linear amplifiers.