April has been a busy month at QRP Labs. We got the new "ProgRock" kit completed, manufactured, documented and released. Dave VE3KCL's balloon flights have been extremely successful and have generated a lot of interest, correspondence etc. 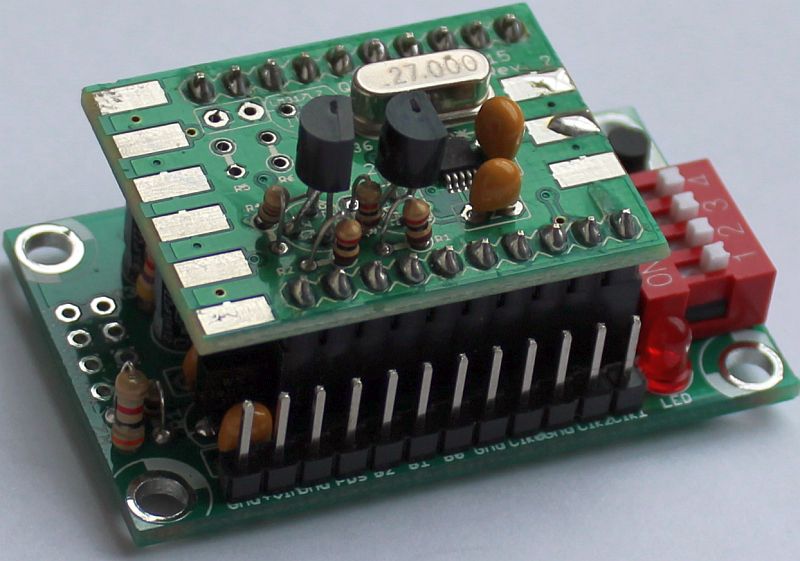 As I mentioned last month, this GPS receiver kit has been very popular, so I have just had a new batch of 1,000 manufactured. The existing batch ran out about 2 weeks before the new batch arrived so there have been some delays to some orders containing the QLG1 kit.

These BPF kits have been manufactured already, for all 10 HF bands from 160m to 10m. I now have to complete the construction, documentation, and testing, to validate final component values. They should be ready soon! The BPF is a double-tuned resonator circuit, and fits on a PCB the same size and style as the existing popular QRP Labs Low Pass transmitter output filter kits, 1.5 x 0.5 inches (38 x 13mm). Each PCB has two toroidal inductors in parallel with capacitors, to make the two resonant circuits, and a small coupling capacitor between them. Each resonant circuit also contains a trimmer capacitor for tuning. I have always found this BPF design reliable and easy to adjust, which is important for those of us with less test equipment and skills etc.

The first, S-7 was launched from Toronto on 11-Mar-2016 and flew quickly out into the Atlantic at an altitude of 7-8000m. The balloon was brought down by storms in the North Atlantic. The flight time was 33 hours during which the balloon traveled over 5,000km. Fast! See details at http://www.qrp-labs.com/ultimate3/ve3kcl-balloons/ve3kcl-s7.html

S-8 was launched on 30-Mar-2016 and used a special balloon envelope that Dave VE3KCL built himself. The larger balloon took the payload to a much higher altitude, reaching 13,220m. But there was a leak in the balloon and it descended slowly,  landing in the Atlantic ocean off the east side of Martha's vineyard, for a flight time of 10 hours. More details: http://www.qrp-labs.com/ultimate3/ve3kcl-balloons/ve3kcl-s8.html

The S-9 flight was launched on 10-Apr-2016 and is still flying, an amazing flight which people have described with many adjectives - fantastic, inspiring, epic, and so on. This flight uses Dave's usual 2-party-balloon configuration with the lighter payload. The altitude of the flight is around 10,000m. So far the S-9 balloon has been aloft for over 14 days, covering 45,000km. It took a very windy path over the Atlantic, looping a few times around Greenland and Iceland. It flew quickly over Europe, then Syria, Iraq, Iran and several days traveling north and east in Russia. Next Mongolia, China, Russia again then out into the North Pacific ocean. It has now reached Alaska and there are hopes of it completing the whole circumnavigation!

This map shows the entire flight, with the Toronto launch point on the far left (West) and Toronto again on the right. The red lines are the daytime, where the sun was powering the transmitter's solar cells. The small battery lasts only a short time after sunset. The thin blue lines on the map are manually interpolated based on the NOAA flight predictions which have always very accurately predicted where the balloon would wake up the following morning. More details, see http://www.qrp-labs.com/ultimate3/ve3kcl-balloons/ve3kcl-s9.html

The Heard Island Dxpedition team arrived safely back in Australia on 22-Apr-2016, following what appears to have been a very successful DXpedition. There is a huge amount to read on the DXpedition website https://vk0ek.org/, all very interesting. The DXpedition also has a QRP Labs 250-milliwatt Ultimate 3S battery-powered beacon, assembled by supporter Richard AB4ZT. It was transmiting on 40-30-20-15-10 meters using a Hustler 4BVT vertical throughout the expedition. Cape Town as ZS/K2ARB, on the voyage aboard the R/V Braveheart as K2ARB/M, on Heard Island as VK0EK, back on the Braveheart and in Perth as VK/K2ARB. Jan ZS6BMN put together a track of the journey from Heard Island back to Perth, Australia, partly using data from the WSPR reports from the Ultimate 3S. See image below. At times, there was bad weather during the voyage and the WSPR was the only reporting mechanism giving assurance that all was still well with the ship!

One of the things reported on the WSPR software is the "DT" of the received stations. This is an offset in time, showing how accurate the transmission is compared to the ideal timing. According to the WSPR protocol, the transmission starts on the 2nd second of even minutes (e.g. 02, 04, 06 etc past the hour) and each of the 162 symbols has a duration of 256/375'ths of a second i.e. 0.683 seconds. From time to time I get enquiries about why a Ultimate 3S station with GPS discipline is reporting any DT. Surely with the GPS in place, everything should be accurate and DT should be zero? Actually DT can potentially arise in many ways, perhaps (I am speculating) including network delays in synching the PC that receives the signal, signal processing in the PC, in the radio, propagation, etc. I did an experiment that proves that the Ultimate 3S transmitter with GPS, is extremely accurate. Any WSPR DT must arise elsewhere, the transmitted signal timing is as close to perfect as it can be! The same conclusion was reached for JT65. See http://www.qrp-labs.com/ultimate3/u3info/dt.html for the full story

Firmware versions v3.09d and v3.10 were released on 19-Apr-2016. As usual, if you want to upgrade, you can install the firmware yourself from the files in the QRP Labs YahooGroups forum, if you have the AVR programmer; or if you wish, you can purchase the programmed chip in the QRP Labs shop.

v3.09d is the last of the firmware versions which will support the older Ultimate3 kit with the AD9850 DDS. All future versions will be only for the Ultimate3S which was launched in January 2015 and uses the Si5351A Synth. If there are any required bug fixes then I will make a v3.09e/f/g etc version for the old AD9850 DDS version. v3.09d has a few small enhancements, one of which is removing the 150MHz upper limit on the Ultimate3S transmission frequency. The Si5351A datasheet upper limit is 200MHz. But the U3S with v3.09d has been tested successfully on CW on the US 222MHz band. The Si5351A continues producing output all the way up to around 300MHz.

As always, please do write with any comments, ideas, criticism, feedback of any kind!