Like the former flights, this one also used a special U3 firmware version on an Arduino Nano board, with QRP Labs Si5351A Synthesiser. For this flight Dave VE3KCL used a homemade balloon envelope (picture below). There appears to have been a leak. The balloon climbed to a record altitude of 13,220m but then descended steadily. Flight time was 10 hours.

The map below was updated automatically with the latest received position during the balloon's flight.

The balloon S8 probably landed in the Atlantic ocean off the east side of Martha's vineyard.

The U3 on this flight was running on 3.3v @20Mhz instead of the normal 5v... this allowed me to dispense with some weight ( the boost converter) and used 7 solar cells instead of the usual 8 cells. I had lightened up the Si5351 board and removed the level converters this time as both the U3 and the Si board were now talking at a 3.3v level.

The 7 solar cells made ample power and when the lipo battery voltage went over 4.3v the lipo protection circuit disconnected the lipo and the solar panels were driving the 3.3v voltage regulators which are good up to 6v input. This would have allowed a full battery and up to a 4 hour transmission period after sundown which would have been a record had the balloon stayed up that long and if the lipo could have stayed warm enough to produce current.

It was an estimated -60c outside the foam case.

The balloon material is .00048" metallized PET and is very light and filled with static electricity and extremely challenging to work with... more that a few expletives were uttered during the development of this balloon envelope. pressure test picture is below.

I made the prototype balloon to about 72"x33" and at home got the leakage to what I considered a manageable amount of .3gms of lifting gas per 24hr period. With 6 gms of free lift I thought this could last in the stratosphere for up to 20 days. The internal pressure in the balloon was estimated at .15 psi and the balloon structure had been tested to up to .8 psi so there was a safety factor for blowing out the balloon or 4 or more.

By the float level of 13180 meters ASL (43,240' ) (higher than all commercial airliners and almost all of the bad weather) the math shows that the balloon envelope stretched by about 10%. which is less that a party balloon.

I had made a 13km balloon and a 10.5km balloon and today the winds looked better for a straight shot to Europe at 13km.. the wind speeds were slower at 13km but less detours on the flight. It looks like I will retire the 10.5km balloon till I find the cause of the leaking.

What happened I think is the balloon leaked faster than anticipated and when the free lift is gone it descends at an even rate as it did today.

The telemetry uses the same general system as the S-4 flight. See the S-4 page for more details of the telemetry protocol. The transmission schedule for the flight is based on a 12 minute transmission cycle, commencing on the hour and repeating every 12 minutes: 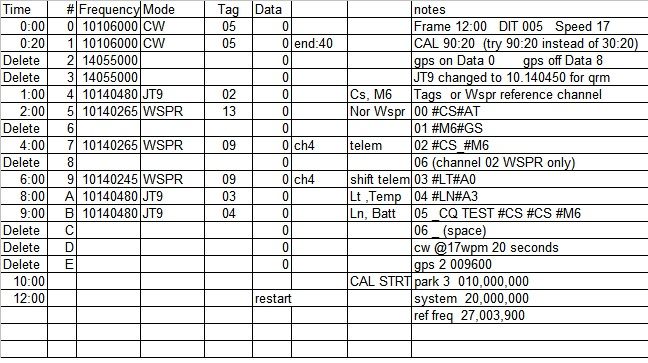 Note, the voltage and temperature measurements have some scaling problem, that we need to investigate and correct in future flights.

The left photo shows the balloon envelope during testing. Of course when launched it is significantly under-inflated.

Here are some photographs from an earlier launch attempt on 22-Mar-2016. The launch looked good but winds were quite strong and the balloon got caught in a downdraft, resulting in a crash landing in a tree. Dave was worried about how to shut down the transmitter but in the end there was no problem because the solar cells apparently got smashed in the crash. Once battery power was depleted the balloon transmitter stopped transmitting.