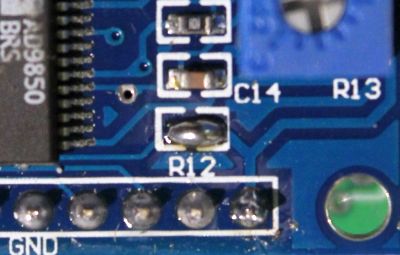 Note: this modification only applies to the U3 kit, not the U3S. The U3S uses the Si5351A synthesiser module which is already capable of 6m operation.

The following modification to the Ultimate3's pre-assembled AD9850 DDS module is easy and seems to be worthwhile, providing:

The basic idea is simply to remove the resistor R12 from the DDS module, replacing it with a blob of solder. Resistor R12 is located near the blue trimmer potentiometer on the module. The photo here (right) shows this modification. Applying heat with a soldering iron to the resistor quickly removes it. A blob of solder easily bridges the gap. But, before making the modification, please read on to understand it.

The resistor R12 is a 1K resistor which is connectecd between the analogue sinewave output and the positive comparator input. The negative comparator input is derived from a potentiometer (the blue square trimmer potentiometer on the module) which allows adjustment of the comparator threshold voltage. We have a datasheet for a similar module (click here). It's not the same manufacturer as the one supplied with the U3 kit, but several manufacturers are making the same module, and they appear identical. Click here for a .gif of the circuit diagram. The black line running along the bottom is added by me, to make it clear how the signal connects from the analogue LPF output via the 12K resistor, back to the comparator positive input.

The comparator output is used in the U3 to drive the BS170 PA MOSFET gate in hard on/off style: the transistor is operated in Class-D (we hope). The trimmer potentiometer adjusts the duty cycle of the output, and best power output from the U3 is generally obtained at 50% duty cycle. However most of the travel of the blue potentiometer produces no output at all (0V or +5V at the comparator output), and the adjustment to get equal mark/space ratio (50%) is quite tricky. See also my DDS testing/adjustment description page.

The use of the 1K resistor R12 is curious. The AD9850 datasheet does not make any suggestion or mention of such a requirement. The AD9850 datasheet specifies the typical comparator input capacitance as 3pF. Together with 1K that produces an RC-filter with a 3dB rolloff at 53MHz. However, there are likely to be stray capacitances involved too, and even 2pF of additional capacitance picked up from around the board etc will cause a 3dB rolloff to occur at 32MHz. Furthermore, the output sinewave amplitude starts to reduce anyway (see the paragraph on the sin(x) / x envelope in the "theory of operation and application" section of the AD9850 datasheet). The module is inexpensive and the manufacturers probably didn't use the most amazing quality parts in the anti-alias / reconstruction low pass filter on the board either. In any case in my experience, the higher frequency you go, everything gets worse anyway. Given all this, it is not totally surprising that everything gets much more sensitive as the frequency gets higher and higher. Generally the U3 can be used on the 10m band but not higher, i.e. not up to the 6m (50MHz) band.

10m spectrum measurements after the mod

On the 10m band (28MHz), the effect of the modification is to make the trimmer potentiometer adjustment less critical. I measured a slight increase in output power from 209mW to 222mW. The effect on harmonic levels is practically insignificant. The following table shows the measurements before and after the modification. The result is that the power output is slightly increased, and there is no damage to the harmonic content.

The effect on the output spectrum however, is more impressive. Click the two thumbnails below to see the before and after spectra. There is a much lower level of spurious outputs after the modification. The performance of the comparator definitely appears to be improved, by this modification. All of these spurious outputs were anyway at a reasonably low level (arguablly) but in any event, it is never a bad thing to reduce unwanted outputs.

In the photos, AFTER is on the left, BEFORE is on the right. You can see the clear reduction of spurs in the thumbnails, without even opening the full size ones!

80m spectrum measurements after the mod

Way down on the 80m band (3.5MHz), I noted similar things to the 10m results. I measured a slight increase in output power from 91mW to 98mW. The effect on harmonic levels is practically insignificant. The following table shows the measurements before and after the modification. The result is that the power output is slightly increased, and there is no damage to the harmonic content.

Again, there is the same beneficial effect on the output spectrum, an easily visible significant reduction in the level of spurious output signals. Click the two thumbnails below to see the before and after spectra. AFTER is on the left, BEFORE is on the right. You can see the clear reduction of spurs in the thumbnails, without even opening the full size ones!

A low pass filter for 6m 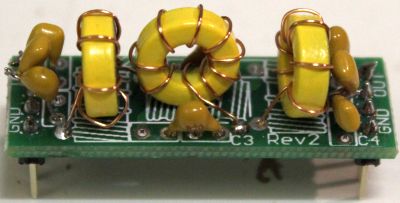 Now, for the first time, the comparator actually works on the 6m band (50MHz)! We should note, however, that the spectral purity of a 50MHz output of a DDS where the reference oscillator is at 125MHz is not good. This is an inherent limitation in the frequency synthesis process in the DDS.

The free AADE filter design software was used to design and simulate a 50m LPF. It's a 7-element filter with the same topology as the QRP Labs LPF kit. The component values are:

In the photo shown to the right, I have used a series combination of three capacitors 56pF-56pF-100pF to get 22pF, as I lacked any high quality Class-1 dielectric NP0 / C0G / CC4 type capacitors in the 22pF value.

The response of this filter is shown in the image below (click it for full size):

Now let's look at the output spectrum with the 6m LPF. The U3 was set to the 6m WSPR centre frequency 50.2945MHz. Click the thumbnail image to see the full size version.

The harmonic level is acceptable. But, there are many spurious outputs! This is not unexpected. As I mentioned, the DDS process inherently generates spurs. When the output frequency is a small proportion of the 125MHz reference oscillator, the spurs are at a very low level. But 50MHz is not a small proportion of the 125MHz reference oscillator! There's a large signal at about 26MHz, that is at only -12dBc. Put another way, when we're transmitting 105mW on the wanted 50.2945MHz output frequency, we'll also be transmitting 7mW somewhere near 26MHz! The individual operator will need to consider whether or not these spurii are at a reasonable enough level, to put a 6m signal on air. We do have to accept that if we are going to try to use this AD9850 DDS at 50MHz then we are going to get a higher level of spurious outputs. But, perhaps there is more we can do to improve it!

One method to reduce the spurs is to use a bandpass filter rather than a low pass filter. The 7-element low pass filter design in the Ultimate3 kits is nice because it is easy to build, requires no alignment, and is so reproducible that nobody ever seems to have problems with it. You just carefully count the number of toroid turns as you wind them, solder it all together, and away you go. The inductances you wound won't be exact compared to the design values (the inductance depends sensitively on how closely you space the turns), but everything will work, regardless. A bandpass filter is a more tricky proposition, it is much more sensitive to correct component values or requires alignment using adjustable components e.g. trimmer capacitors. In the case of the 6m U3 output, it seems worth making the additional effort to use a bandpass filter rather than low pass.

A bandpass filter for 6m

I used a bandpass filter from WB5RVZ's website, from a Softrock SDR design. The relevant part is shown here: 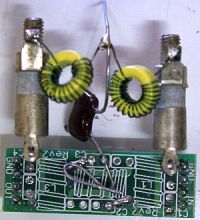 I wound L1 and L3 using 22 turns on T37-6 toroids. On my AADE LC meter these measured close to 1.64uH. I found a good quality 39pF capacitor in my junk box but no decent 5.6pF capacitors (by decent, I mean low-loss RF types that are known in various ways: Class 1 dielectric / CC4 / NP0 / C0G). So I used some old trimmer capacitors and adjusted them for 5.6pF on my AADE LC meter. It's built on a QRP Labs LPF PCB. The result is very VERY ugly (see photo, right).

This filter works very well! See the filter response traced from 0 to 100MHz, shown below (click for larger photo). This measurement was made with the filter in the open, i.e. not in an enclosed box - it is so ugly and big that it does not fit in my diecast aluminium box. It is important to get the component values correct, and there are a few dB of insertion loss. But this is what you get, with band pass filters! It isn't as easy as throwing a LPF together and not even bothering to measure anything.

Ultimate3 on 6m, using the BPF

Here's the spectrum of the U3 output on 6m, using the above BPF.

The nasty spurious emissions at about 26MHz and 76MHz are now attenuated to -43dBc and -44dBc respectively. Much more respectable. The higher insertion loss of the band pass filter compared to the earlier low pass filter caused a loss of power, reducing it from 105mW to 72mW. I think that this is an acceptable price for the cleaner output spectrum.

Now a close-in sweep from 45MHz to 55MHz to examine any close-in spurs, which are so close to the carrier that they cannot be attenuated by the BPF.

Notice that there are quite significant spurs at about 48.79MHz and 51.73MHz, which are at -22dBc and -27dBc. As mentioned previously, the inherent limitations of the DDS process mean that when the output frequency is a large proportion of the 125MHz reference frequency, spurs will necessarily be introduced. The exact size and location of these spurs is going to depend on the exact output frequency and reference frequency.

Now, a really close view covering a width of 1MHz only. It's quite clean near the carrier itself.

1) This very simple modification seems worthwhile anyway (with or without attempting 6m), as it provides a little more power output on all bands and improves the spectral purity of the output.

3) The spurious output levels of the U3 on 6m with a band pass filter are much more acceptable but there are some reasonably significant spurs at around +/- 1.5MHz (-22dBc and -27dBc).