Firstly, apologies for the lack of May newsletter... May was very hectic, due to holidays and the US trip for Dayton FDIM (see some photos below). Dayton FDIM was very busy: so many interesting people to meet and talk to, and a great pleasure to meet quite a few QRP Labbers too.

The Dayton hamvention fleamarket was awesome... and the hamvention's new venue seemed to be an improvement over its previous home, other than the mud in the fleamarket after a heavy storm passed overhead.

Vendor's evening was really busy, the QRP Labs table had a large crowd around it all evening and lots of QRP Labs kits went home with new owners. By the time the crowd had dispersed, I looked around me and was surprised to note that all the other sellers had packed up and left already!

Right: QRP friends at the Holiday Inn Fairborn hotel, home of QRP ARCI FDIM (Four Days In May). From left to right:

Below right: in the foreground, the crowd around the QRP Labs table at FDIM vendor's evening. 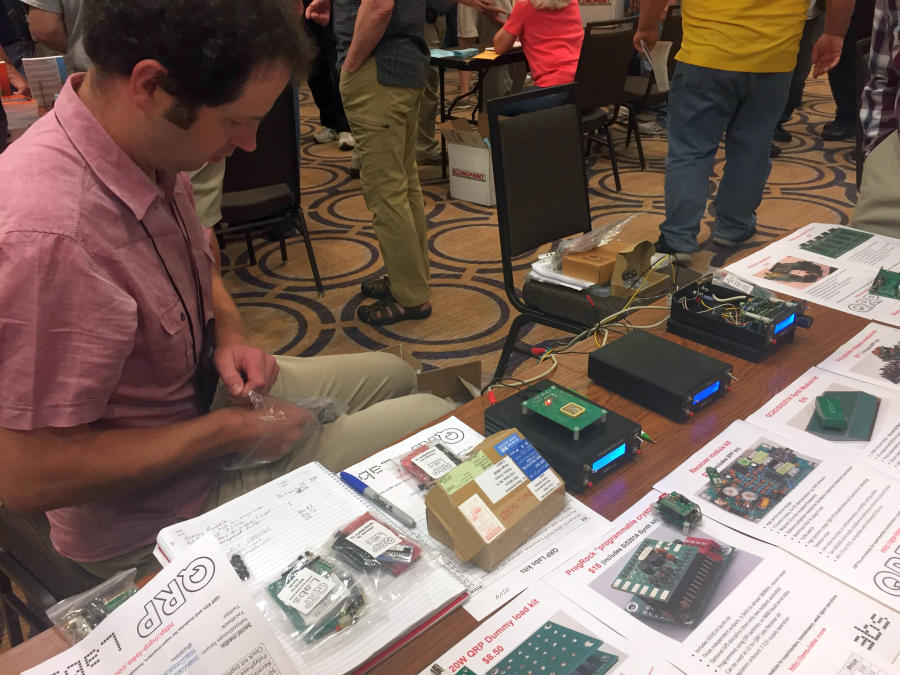 Below left: by the time the crowd at QRP Labs FDIM vendor's evening table had dispersed, everyone else in the convention hall had packed up and left! A bemused member of the Holiday Inn staff says, seriously, really it IS time to leave now...

Below right: G0UPL meets Elecraft co-founder Wayne Burdick N6KR at Elecraft's sizable display at the hamvention. We discussed the Si5351A Synth chip used in both QRP Labs kits and the Elecraft KX2, and how to get it to generate a 90-degree phase offset (quadrature) on two of its outputs. QRP Labs will be at Friedrichsafen International Amateur Radio Exhibition, the largest ham fair in Europe, from 14..16th July. I hope to meet some QRP Labbers there, and also have with me a good selection of QRP Labs kits for sale.

You can also come and have a look at the Pre-production model of the next QRP Labs kit, which will be available in early August!

From the C3 website: "A Canada 150 Signature project, Canada C3 is a 150-day expedition (June 1 to October 28) from Toronto to Victoria via the Northwest Passage. It will inspire a deeper understanding of our land, our peoples and our country."

The successful C3 amateur radio proposal was made by QRP Labber Barrie VE3BSB who led the team who installed the Ultimate3S and antennas onboard the Polar Prince. The Ultmate3S transmits in Extended WSPR mode (with 6-character Maidenhead locator) 24 hours a day autonomously, on 40, 30 and 20m. QRP Labs provided a tracking solution that populates a live map at http://qrp-labs.com/c3 - Jeff VE3EFF has provided a computer and stable internet connection to run the tracking.

The last batch of Low Pass Filter kits manufactured included 40 kits for the 2m band for the first time. The kit can also be built for the 222MHz band. The 40 kits sold out quite fast and was out of stock for quite a few weeks. QRP Labs has now prepared 100 more kits for 2m/222MHz and they are back in stock in the QRP Labs shop, see http://shop.qrp-labs.com/LPF As of the time of writing this on 27th June, Bob ZL1RS's ocean floater has been at sea for 405 days in the South Pacific ocean! HAPPY BIRTHDAY ocean floater! Really a belated happy birthday, 40 days late... sorry about that (lack of May newsletter). Ocean Floater is now in QH64HW around 600km East of Cairns, Australia.

The Ultimate3S-based transmitter on board transmits WSPR and JT9 once per hour.

The battery pack consists of 18 alkaline D-cell batteries. As the battery voltage declines, the current drawn increases more and more as the switching boost regulator must draw more current to supply the transmitter power. The system is programmed to shut down when the battery voltage falls below 1.2V.

There have been lots of balloon flights flying QRP Labs products since the last newsletter! So here is a quick summary:

U3S-10 by Jim N2NXZ was first up, on 10th May... well, for a minute or two, anyway! Soon after launch from Jim's rooftop it got caught in a downdraft and ended up stuck half way up a tree a few houses down the street. It continued transmitting there for a while. This story and that of the unfriendly neighbour who owns the tree, prompted quite a lot of discussion and debate on the QRP Labs discussion group. After some days the transmitter fell out of the tree, landing on the property of a more friendly neighbour, so Jim was able to recover it. He has been testing the transmitter and despite a few days in the weather, it works fine and will fly again soon. See http://www.qrp-labs.com/flights/u3s10.

S-24 by Dave VE3KCL was launched within hours of Jim's U3S-10 on 10th May (I don't remember who launched first, actually), and caught some very fast jet stream winds, crossing the Atlantic at Southern Spain on its 3rd day. By day 8 balloon S-24 cruised up Japan's East coast to the great delight of a group of Japanese radio amateurs who spent the day reporting and following it; but there was no sign of S-24 on day 9 so it must have taken a swim in the Pacific ocean. See http://www.qrp-labs.com/flights/s24.

Mikael SA6BSS launched his BSS6 balloon on 19th May, it flew for over 22 days! It also uses the Ultimate3S firmware, installed on a custom-designed PCB by Mikael (for light weight). This flight flew with a single Qualatex balloon. Mikeal was cruelly denied the official circumnavigation by a tiny fraction of a degree of longitude, when his balloon turned back heading west within just a few 10's of km of the starting longitude! Perhaps BSS6 actually did cross the starting longitude during the night. Either way, a great flight! Mikael also launched BSS7 on 14th June but I have not heard any further information on that flight.

Jim N2NXZ launched U3S-11 on 23rd May and it headed out over the Atlantic but landed on its second day. See http://www.qrp-labs.com/flights/u3s11. Jim N2NXZ launched U3S-10-2, the second attempt at U3S-10, though using a different transmitter, on 28th May. This one also headed out into the Atlantic but at a much more leisurely pace, landing mid-Atlantic on day 6. See http://www.qrp-labs.com/flights/u3s10 (again).

Dave VE3KCL's next flight was S-25, on 2nd June. This flight took a very interesting flight path, turning Northwards up to Newfoundland, then executing a U-turn when it got there. On the morning of the 3rd day (4th June) the transmitter sent just one report, before disappearing. All hope seemed lost for S-25... but then suddenly it turned up again on the evening of 9th June, just off the coast of Iceland! The frequency calibration must have been in some way thrown way off on the morning of the 3rd day, perhaps due to low battery power issues so early in the morning. Then it took 5.5 days to correct the frequency back to be within the WSPR sub-bands. Thereafter S-25 flew two large slow loops around Greenland and Canada, for a total flight duration of 23 days, before landing (presumably) back in Canada in Quebec. An interesting flight! The furthest North any of VE3KCL's balloons have flown. See http://www.qrp-labs.com/flights/s25.html.

Jim N2NXZ flew U3S-12 on 8th June but it landed the same day, in West Virginia. Jim says that the current batch of balloons he is using seem somewhat inferior. See http://www.qrp-labs.com/flights/u3s12.html Last but by no means least, the first test flight of the QRP Labs U3B balloon tracker prototype! Constructed and launched by Dave VE3KCL on 16th June. This prototype is about twice the size of the expected final PCB, because in practice it was found to be too difficult to assemble the tiny surface mount components by hand on both sides of the PCB. So the prototype flown uses a larger PCB with most of the components on the top side only. The U3B-1 flew with WSPR callsign "G0UPL" and telemetry on Channel 2 (see the S4 balloon flight page for a description of the WSPR telemetry protocol developed by QRP Labs).

Unfortunately on ascending through 10,000m the GPS stopped reporting! This problem happened with a particular GPS model used by Dave VE3KCL on some earlier flights. The GPS in the U3B is a different model, also based on the MediaTek chipset, but apparently suffers from the same issue. There is a command which we can issue to the GPS which will put it into a "balloon mode" which will operate up to 80,000m (allegedly) and the U3B design firmware is flexible enough to allow this kind of customisation. So on the next flight, this "balloon mode" command will be issued every time the GPS is powered up, and hopefully this will solve the 10,000m problem.

U3B-1 stopped sending position updates a couple of hours after launch, when it passed through 10,000m up towards its expected cruising altitude of around 11,000m. On 24th June (day 8) U3B-1 sent some reports from Libya! So evidently the balloon must have temporarily descended below 10,000m for some reason, picked up the GPS location and synchronised the time, and then started transmitting that location. Nothing has been heard from U3B-1 since 24th June. See http://www.qrp-labs.com/flights/u3b1.html for more details.