Gwyn G3ZIL wrote with some concern about the noise levels when using the Si5351A as Local Oscillator (LO) for a WSPR receiver. Subsequently he further investigated and concluded that the Si5351A can be modulated by mains hum, so very clean power supplies can be critical when using this device. The following article by Gwyn G3ZIP is reproduced with his kind permission.

1. QRP Labs Si5351A/Arduino shield LO powered via 7805 regulator off an external "wall wart" which has a built in 7812 regulator, and for comparison, off a 15V manganese alkaline battery,

Figure 1. Total AF output over the band 300-­‐2000Hz (­‐6dB points) with RF input level (signal+noise) for GG Mk2 strip-­board prototype at 10MHz (red), Mk2 PCB version at 7MHz (blue) both using GG's crystal local oscillator module compared with that when using a QRP labs Si5351A Synth LO with Arduino shield with the 7MHz PCB version, running on the good wall wart (green) and on a manganese alkaline battery pack (purple). The measurements suggest the noise over 300­2,000Hz is equivalent to an input of ~0.08μV with the xtal LO and 1.5μV with the Synth when on battery, and 0.14μV when on battery. 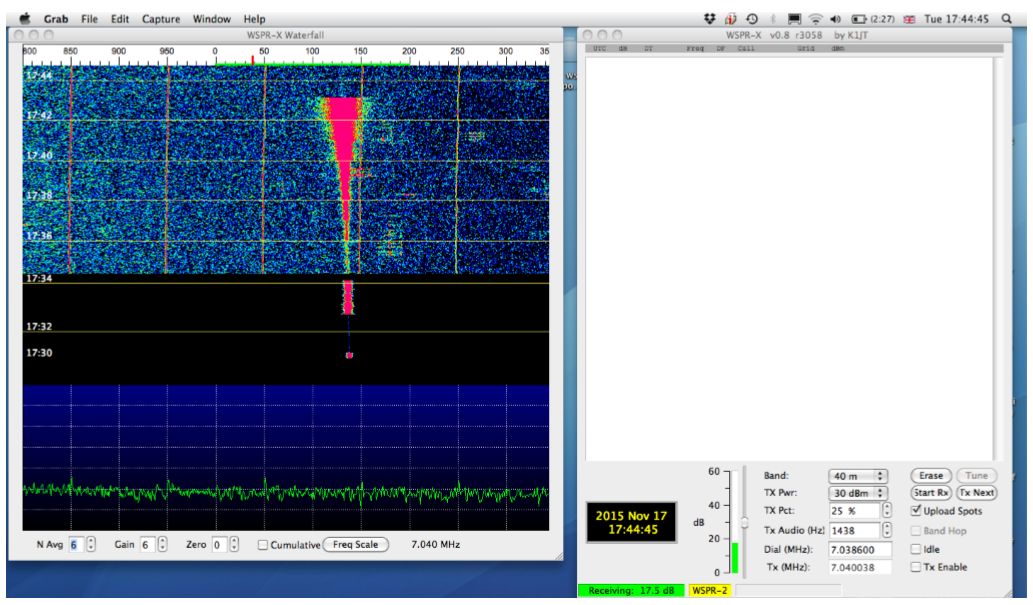 Lower pane with spectrum generally just less than two divisions with odd harmonics of 50Hz up to 2.5 divisions. 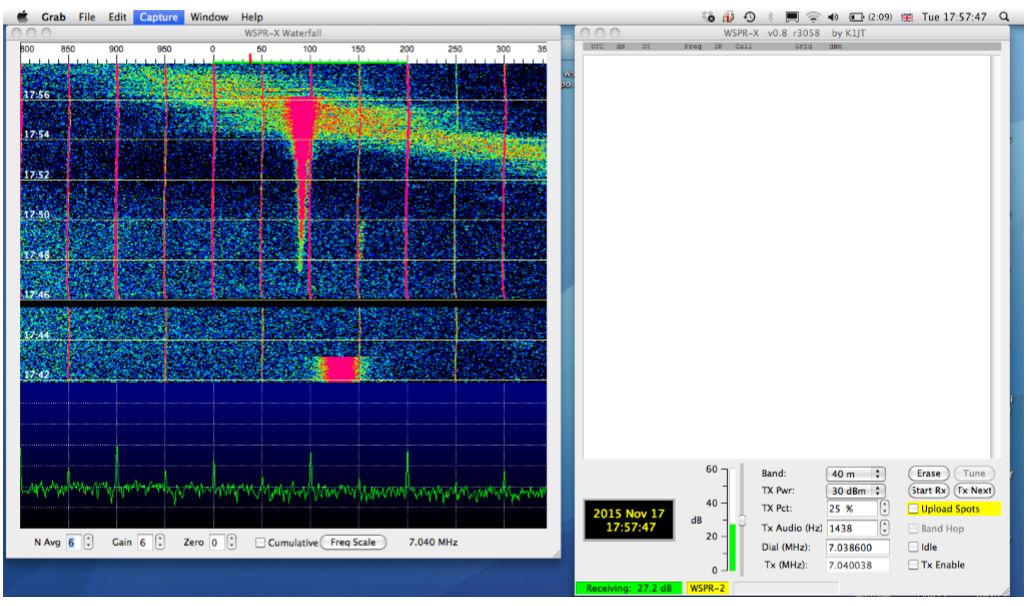 Receiver must be picking up an external broadband signal slowly drifting down in frequency from 1752. 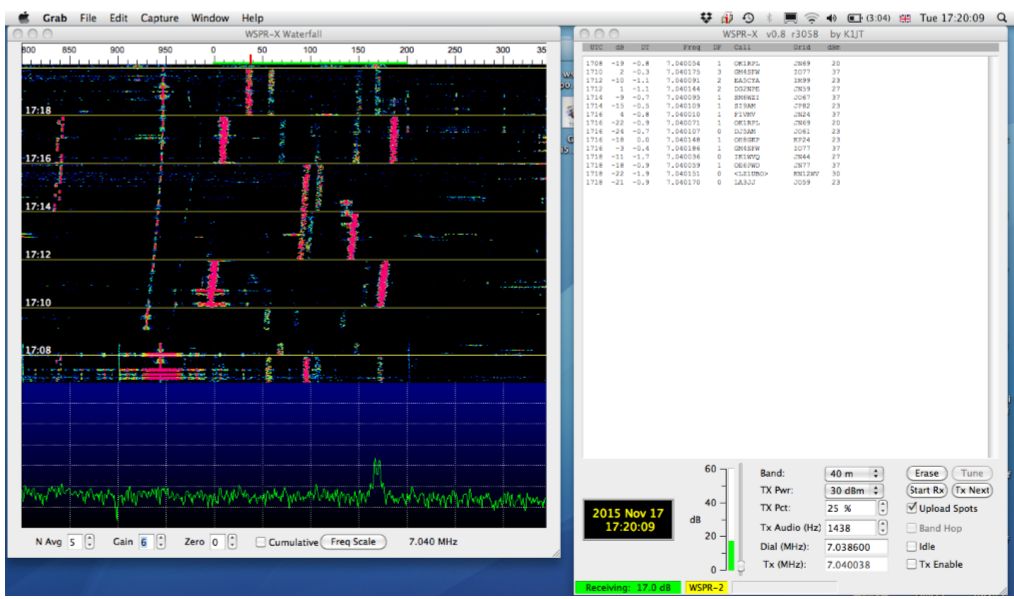 Note: drift is because the xtal LO was used directly from switch-­‐on. 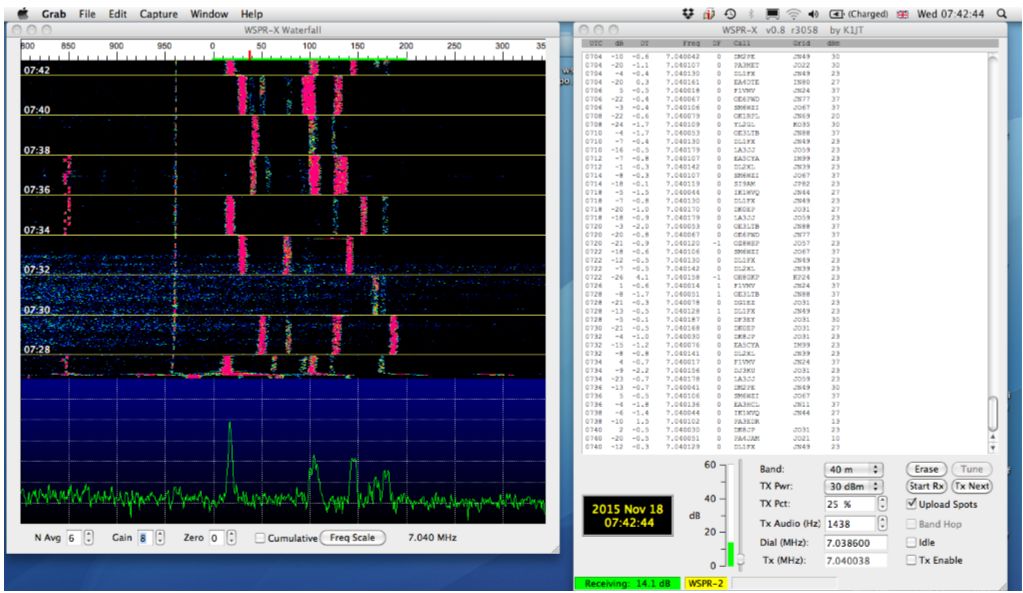 The Arduino, the shield and the Si5351A synth are running from the same regulators as in the previous cases, but the input supply is a 15V battery. No trace of 50Hz harmonics can be seen.

Figure 7. Spectra of the Si5351A CLK1 output with Marker 2 at 1300Hz above the centre frequency. This 1300Hz offset corresponds to "900" on the WSPR-­‐X waterfall display, where a pronounced spectral line is seen. The actual output of the Si5351A is at about +10dBm, for these measurements the output has been passed through a narrow ~100Hz crystal notch filter. tuned to the exact Si5351A centre frequency. This reduces the centre frequency by ~35-­‐43dB without affecting the sidebands greatly. This is necessary, as, otherwise, the DSA815 has too high a noise level to see the sidebands. Left: post crystal filter with the 7812 mains wall wart PSU. The 100Hz minimum resolution of the DSA815 is also a limitation. But these sidebands are stable -­‐ the image is the average of 100 measurements. Right: Exactly the same conditions but with a 15V battery to power the Si5351A/Arduino Shield/Arduino. Note the minimum scale is now at -­‐90dBm. The sideband at 600Hz is just noticable, but at 1300Hz it is at the noise level of the DSA. A deeper crystal notch would be needed to identify the sideband levels. 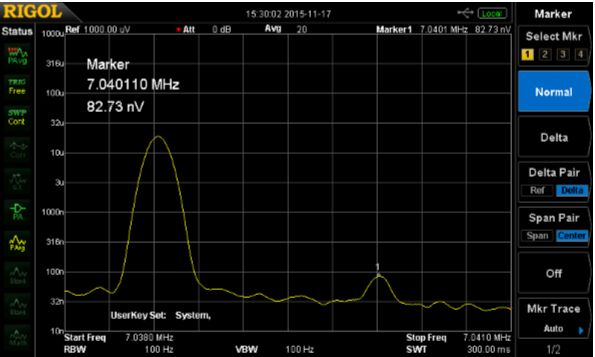 1. The noise level of the broadband AF output from the receiver (300-­‐ 2000Hz), when measured on an AC millivoltmeter, Figure 1, is a pessimistic indicator of the noise level relevant to decoding WSPR signals with the Si5351A as the LO. However, it is an appropriate measure if the intention is to use with SSB signals.

2. This is because, as shown on the spectrum display of the WSPR waterfall, the audio noise power is concentrated at discrete spectral line frequencies, at certain multiples of 50Hz, Figure 3. Apart from these discrete spectral lines the noise level is not noticeably different from that with a crystal LO with very careful power supply filtering. A 10nV WSPR signal would be above the receiver noise level. In almost all situations, when connected to an aerial, for WSPR use, the limiting factor will be the external noise and NOT the Si5351A sideband noise.

3. The higher noise level from the Si5351A synth is a direct result of using a mains power supply. Even a wall wart with a 7812 regulator and 1,000 microfarad decoupling, followed by a 7805 regulator and additional conventional decoupling within the receiver box is not adequate (Figure 7 left). The Si5351A is itself capable of much better performance, which can be seen in Figure 7 right, when powered by a battery. Knowing this, improvements to the decoupling of the mains PSU can be tried.

4. With a battery, the 300-­‐2000Hz AF noise level with the Si5351A is about 6dB greater than the carefully decoupled crystal oscillator. This is of academic interest only, given the real-­‐world noise once connected to an aerial.