Happy New Year 2017 to all of you! I'm starting the new year full of ideas and enthusiasm for new projects (some of which will become new QRP Labs products) and I hope you are too! 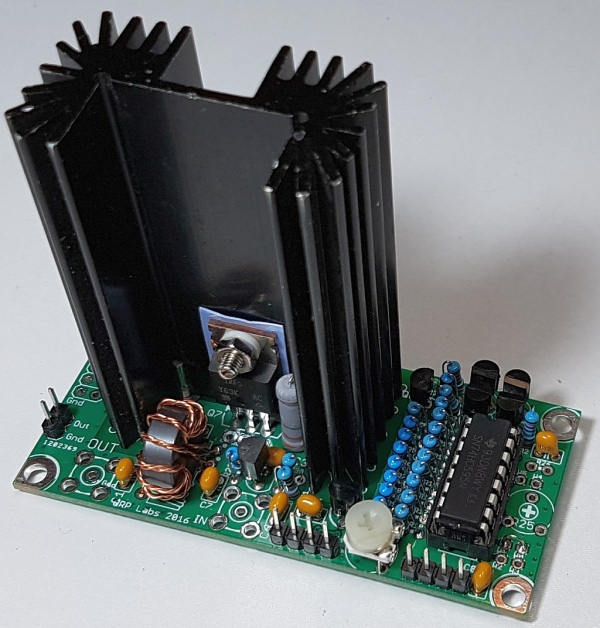 It took longer than expected to get the 5W HF PA kits prepared, mostly due to lack of heatsinks, believe it or not1 The PCB was laid out to match a specific heatsink sample, and upon ordering a batch of them, we were informed that the heatsink is no longer manufactured! Allegedly the heatsink mold had been damaged. Several rounds of negotiation with the factory later, and they agreed to repair the mold and manufacture us a batch of the heatsinks. Then there was another week's delay due to a "lack of raw material"... err... aluminium shortage, in a heatsink factory? Anyway at long last as of 4th January 2017 the new 5W HF PA kit has finally been released in the QRP Labs shop!

An IRF510 MOSFET PA is not really complicated but the difference here, is that this PA is designed to allow microcontroller control of the RF envelope, so that an accurate raised cosine keying profile can be closely replicated. A raised cosine envelope shape allows keying without generating key-clicks what interfere with communications on nearby frequencies. In the kit a microcontroller loads 8-bit values into a shift register, whose outputs drive a Digital to Analogue Converter (DAC). The DAC output controls a discrete component power modulator with foldback current limiting, which proportionately varies the RF output envelope peak-to-peak amplitude.

The kit can be connected directly to the Ultimate3S kit, and firmware version v3.12 includes code to generate the necessary sequence of raised cosine coefficients and load them into the shift register. Application note AN004 gives details of connecting the 5W HF PA kit to the Ultimate3S kit, see http://qrp-labs.com/appnotes. The rise/fall times of the envelope are configurable by a menu entry in the Ultimate3S.

The kit can also be used as a standalone 5W HF PA in your homebrew projects! The circuit has a neat design feature where the 8-bit 74HC595 shift register can be replaced with an ATtiny84 processor which is programmed to generate a raised cosine keying envelope. A 5W CW transmitter with beautiful raised cosine envelope keying can be implemented with just a morse key to ground, and a signal source such as the rotary encoder tuned VFO kit http://qrp-labs.com/vfo. The rise/fall time can be adjusted using an analog voltage into the RC1 chip, which could be set by a potential divider trimmer resistor, for example. The "RC1" key shape processor is available as an option when purchasing the PA kit (+$4). This option is described in App Note AN005 see http://qrp-labs.com/appnotes. The "RC1" chip must not be used when driving the 5W HF PA kit with an Ultimate3S transmitter.

The 'scope trace shown here (right) is a 12wpm "dit" (duration 100ms) with a 20ms rise/fall time to illustrate the raised cosine shape. In practice rise/fall time of 5 to 10ms is commonly used.

Finally if you don't want raised cosine envelope keying at all and all you want is a dead simple PA, there is also an option to omit and bypass all the fancy stuff. There is an assembly manual for the simplified assembly process.

The kit is capable of lots of modification too. The first that comes to mind is replacing the IRF510 with an RD15HVF1 transistor, if you want to operate VHF 6m and up. The IRF510 does a good job from 600m to 10m, but I can only call its performance "pathetic" at 6m. The RD15HVF1 is popular in PAs and is designed for operation up to VHF and UHF. It has a different pinout to the IRF510 but separate pads have been added on the PCB to suit the RD15HVF1, if you wish to substitute it. Other possible modifications would include higher power output by using a higher supply voltage (and modifying the current limiting to permit this).

The full assembly document is comprehensive, and also includes detailed discussion of the various circuit blocks. All in all, there's a LOT of fun in this kit, for $20!

The release of the 5W HF PA Kit also necessitated a new firmware version for people who wish to use it with the Ultimate3S transmitter, to load the raised cosine coefficients into the 5W HF PA kit shift register.

As usual the new firmware version chip is available in the QRP Labs shop here, or if you have AVR programming equipment you can download the .hex file and upgrade your existing chip, from the QRP Labs group (see section 5 below, for details).

3. New enclosures and other new products

The VFO/SigGen kit and the Clock kit are based on the same PCB and components as the Ultimate3S transmitter kit. They also fit into the QRP Labs Ultimate3/3S aluminium case and accessories kit. However, it was perhaps a bit misleading that the front panel was labelled "Ultimate3S QRSS/WSPR". So we have got some different front and rear panels manufactured, that make it possible to offer additional enclosures:

We also manufactured a front panel with the holes and LCD cut-out, and no silkscreen printing at all except for "QRP Labs"; and a blank un-drilled, un-cut, un-printed panel. The panels are available for purchase separately too.

Finally, we have sourced a 20mm knob suitable for fitting to the rotary encoder supplied in the VFO/SigGen kit. This rotary encoder can be installed in the lower right hole of the front panel, and although it's a tight fit, the 20mm knob does fit and can be comfortably operated. The knob costs $0.70 and the shop page is here.

QRP Labs chief of R&D was honoured to be interviewed by Eric 4Z1UB's weekly QSO Today Podcast, episode #125 aired on Christmas Day, 25-Dec-2016. You can listen to the interview here http://www.qsotoday.com/podcasts/G0UPL by clicking the "Listen to Podcast" button. I have been listening to some of the earlier interviews while melting solder in the lab - there's some really fascinating discussion in there, and it really brings home again the point about how wide and diverse the amateur radio hobby is.

QRP Labs has had a lively discussion group since the first kit was produced in May 2010 to accompany a presentation at Dayton FDIM that year. But since then, Yahoo has hit the news headlines multiple times over hacking of personal data. Group members have from time to time complained about message delays, message duplication, messages lost - and none of this appears to have improved over time. Furthermore Yahoo attempt to demand an increasing amount of private information about the account holder - which can be circumvented with some considerable effort.

Therefore on concerns of security, privacy and reliability, the group held a referendum about what to do. I'm going to resist the temptation to recycle all my bad jokes about polls, referendums, Yexit, the popular vote, etc etc. Suffice it to say that moving to groups.io won the poll by a convincing majority and accordingly within a few days we moved everything to groups.io. The groups.io admin provide great assistance with such migrations, and the entire membership of the group (around 1,500 members) was moved to groups.io, along with the entire message archive since May 2010, and all the folders, photos, files etc.

groups.io is run by the same people who originally set up the groups website which was later purchased by Yahoo and became YahooGroups. The website is fast and crisp, messages appear to be delivered near-instantly, and all of the content all migrated across successfully.

If you a QRP Labs kit owner or interested in the kits, and are not already a member of the group, come and join! The QRP Labs group page is https://groups.io/g/QRPLabs.

There was one QRP Labs balloon flight in December, by Daniel DL6OW, named STELLA4. For this flight Dan took a departure from his previous mylar film "floater" balloons with ultra-light payloads, and opted instead for the more common short duration latex balloons. These are larger, carry a bigger payload, and are filled with more helium. They ascend for a few hours to a very high altitude, then burst and come back down (with a parachute). Dan says he wanted to finish his tank of helium and then recommence future flights with "floater" balloons using hydrogen gas instead, like Dave VE3KCL's flights.

STELLA4 carried an Ultimate3S WSPR transmitter, UHD video camera, and GSM/GPRS tracker. There was a crash soon after launch due to a gas miscalculation, but STELLA4 was re-launched the second time successfully. Unfortunately the crash appears to have broken a wire between the microcontroller and the Si5351A Synth, with the result that only an un-modulated carrier was transmitted, no WSPR. But upon landing the GSM/GPRS tracker was functioning fine, and so the payload was swiftly recovered. Dan got some fantastic photos from the "edge of space" and has a flight video on youtube. You can see all the photographs and the video, at the STELLA4 webpage on QRP Labs, please visit http://qrp-labs.com/flights/stella4 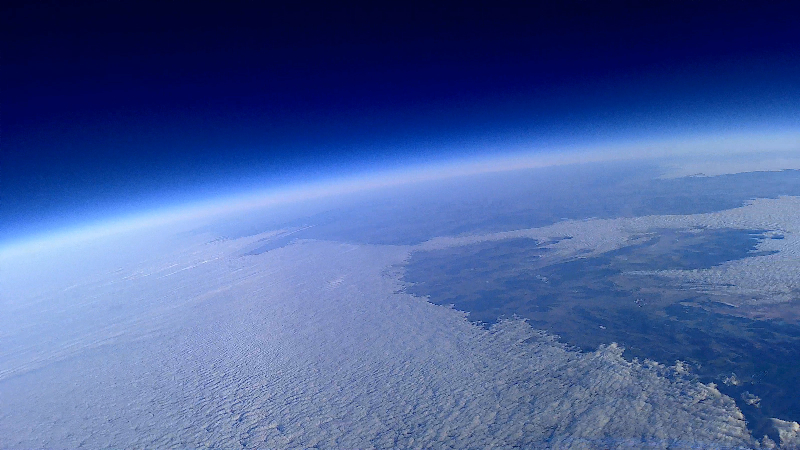 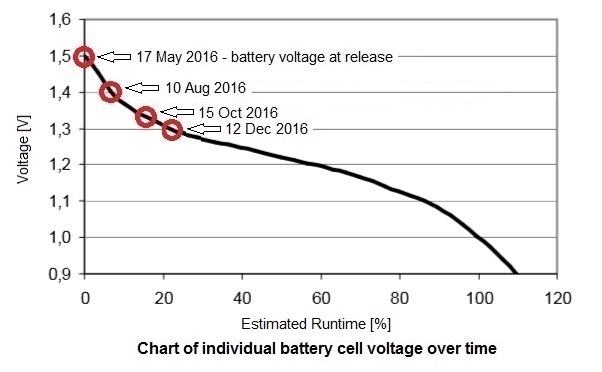