David VE3KCL launched his fourth balloon flight S-4 on 21-Aug-2015 at approx 1340Z. Like the former flights, this one also used a special U3 firmware version on an Arduino Nano board, with QRP Labs Si5351A Synthesiser. Two foil "party" balloons were used, filled with hydrogen.

The S-4 balloon descended steadily at a rate of 920m every position report (12 minutes), and the last transmission was received at 11:30-11:34 UT. The altitude report was 1,120m but this would have been the snapshot of the GPS data at 11:23. Therefore the landing in the Norwegian sea would have been at around 11:35 approx. Congratulations to Dave VE3KCL on another fantastic flight! S-4 RIP! 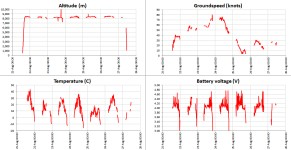 On 27-Aug-2015 the balloon crossed Norway and headed out into the Norwegian see. Radio reception was difficult due to a solar storm affecting propagation, which was more severe at the high latitudes (70 degrees North) where the balloon was located.

The balloon began its descent at approx 10:00 UT, and took about 1.5 hours to descend 8,000m at a rate of about 80m every minute (250 feet/minute). Despite the very poor propagation it was possible to track the altitude down almost to sea level. The last position report was received during the two WSPR frames at 11:30 to 11:34 UT, reporting an altitude of 1,120m. However, this would have been a snapshot of the GPS data taken at 11:23 UT. Given the descent rate, the altitude of the balloon at the end of the final transmission would have only been a couple of hundred meters.

Report start and end time are the UT times that the balloon started reporting and ended reporting on the specified day. Remember that the power arrangements onboard are not yet optimised well enough to permit night-time operation, so the balloon only transmits during the day. The "Best DX" column shows the longest reception distance reported by WSPRnet for the standard WSPR message. It therefore misses out a station such as ZL1RS which sent a report of the telemetry WSPR message but not the standard one (I will fix that, soon).

The last two columns show the percentage of transmissions which were copied by at least one station. A "full report" is defined as a transmission timeslot where one where BOTH the standard WSPR transmission and the subsequent WSPR telemetry message were copied. A "partial report" is one where EITHER the standard WSPR message, or the special telemetry message, but not both. Remember that the standard WSPR message contains 4-character locator. The special WSPR telemetry message contains 5th and 6th Maidenhead locator characters, altitude, speed, battery voltage, temperature, and GPS status. Therefore both 2-minute messages must be reported by at least one station, in order to determine ALL the data. If only the standard message is received, then the balloon location is known approximately (Maidenhead square resolution i.e. 4 characters). If only the telemetry message type is received, then the location is not known, but altitude, speed, battery voltage, telemetry and GPS status are known. 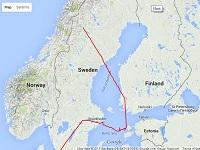 After a brief visit to Finland, we're going back over Sweden, in the opposite direction! Altitude and all systems behaviour looks good still. 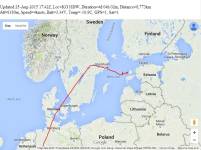 The S-4 balloon passed leisurely over Sweden, right over the capital Stockholm. It must have been a very scenic view, for S-4! After the frantic rush across the North Atlantic and yesterday France, Luxembourg, Germany and Denmark, today the balloon took a well-earned break. Wind speed was very low, as S-4 drifted out over the Baltic sea. By sunset it had made it slowly across to the Estonian island of Hiiumaa. There were nearly 2,000 WSPR reports today, including some from Australia and New Zealand, by long path. Amazing for 16mW! Also today:

1) A very interesting analysis of the S-4 flight communications by Eduardo EA3GHS: http://ea3ghs.qrp.cat/balloon/s4.html

2) David VE3KCL provides this link for high altitude weather (all temperatures in minus numbers; balloon is between fl24, 24,000ft and fl30): http://www.avmet.ae/metcharts. 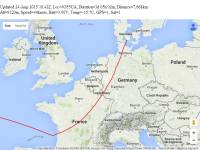 Congratulations Dave VE3KCL! S-4 successfully made it across the Atlantic! It passed quickly through France, Luxembourg and Germany, ending up in Denmark at sunset when the power shut down due to lack of sunshine on the solar cells.

The S-4 balloon has been very successful so far, travelling very quickly across the North Atlantic. Congratulations to Dave VE3KCL for the successful launch and timing it to get the S-4 balloon right into the jet stream. The total distance so far is 5,068km.

Thanks to the following lists of WSPR reporting stations

This telemetry decodes to:

The JT9 also contains some of the same data but receive station network coverage is likely to be less comprehensive. The advantage of the WSPR telemetry is that there is an existing vast network of WSPR receiving stations, automatically receiving and loging the data. The CW on multiple bands is such that it could be decoded by the reverse CW network i.e. "TEST TEST DE VE3KCL VE3KCL".

As background, this is a very useful document by Andy G4JNT, explaining the process for encoding callsign, Maidenhead square, and power into the WSPR tones sequence. This document was used as the basis of the Ultimate3 source code for the WSPR mode. In particular, note that although standard WSPR messages transmit three pieces of information - callsign, locator and power - in fact, the encoding splits into two blocks: callsign, and locator/power.

Following is a brief explanation of the special WSPR telemetry protocol used on the S-4 balloon flight.

The data from the S-4 balloon is sent with 1st and 3rd character being zero. For example. 0C0QQE. This permits the messages from the balloon to be identified in the WSPRnet database. The ITU does not allocate callsigns starting in "0" or "Q". So any callsign where the 1st character is "0" or "Q" and the third character is 0-9, could be used with the S-4 balloon telemetry. Therefore 20 "channels" exist so 20 balloons could operate simultaneously using this protocol.

The 4-character Maidenhead locator sent by a standard WSPR message, has a position accuracy of 100km or more (depending on where on Earth you are). See ARRL's page: "...measures approximately 70 x 100 miles in the continental US". Better position accuracy can be obtained by adding two further characters, making 6-character Maidenhead locators overall: "...corresponding to 3 x 4 miles in the continental US". For balloon tracking using WSPR, the position takes several minutes to send, and in the case of S-4, is sent every 12 minutes. The GPS position snapshot is taken at the start of the 12 minute cycle. The balloon will typically have moved considerably by the time the position report has been sent, received and decoded. So the Maidenhead subsquare resolution was felt to be adequate for tracking a long distance balloon.

Encoding of these additional parameters follows the above general procedure, over-writing the 4-character Maidenhead locator WSPR field and the power field, with values encoded from the required data. The first two Maidenhead locator characters are in the range A-R, having 18 possible values. The 3rd and 4th locator characters are in the range 0-9, i.e. 10 possible values. The power is base 19. This is because according to the WSPR protocol the power in dBm must be in the range 0..60dBm but can only occupy discrete power levels 0, 3, 7, 10, 13, 17 etc. up to 60dBm. There are 19 possible values. The number of permutations of 4-character Maidenhead locator and Power, in the WSPR fields, is therefore 18 * 18 * 10 * 10 * 19 which is 615,600. The required telemetry must therefore be compressed into a number not more than 615,600.

The temperature is coded by a number in the range 0..89, which represents temperatures in the range -50C to +39C with a resolution of 1C. On the balloon they came from an analogue temperature sensor, read by the ATmega328's ADC peripheral.

Speed in knots, is taken from the GPS NMEA serial data directly (ground speed parameter) and is measured in knots. It is coded by a number in the range 0..41, which represents 0 to 82 knots with a resolution of 2 knots.

Two GPS status bits follow; the first is 1 if the GPS data validity flag in $GPRMC is "A", 0 otherwise. The second bit is 1 if the number of tracked satellites is at least 8, which is a reasonable indication of good GPS reception health.

THIS SPREADSHEET illustrates the encoding and decoding. It can be used to decode WSPRnet reports, such as the example 0C0QQE RG74 43 given above.

The FLIGHTLOG spreadsheet contains the raw data and telemetry decoded for each position report, charts, and daily summary.

These photos from Dave VE3KCL show the flight payload and solar cell array.