Jay Sissom W9IUF in Bloomington IN (locator EM69qc) is thought to be the first kit builder to get on air! He writes: "Woo Hoo!  It worked!  I attended the Four Days In May event at Dayton this year. Hans G0UPL gave a talk about QRSS and offered beacon kits for sale. I built one and put it on the air yesterday. It is running 50mW into a dipole in my house. His kit was easy to put together and as you can see, it works. The hardest part was adjusting the frequency (well winding 35 turns on L1 was challenging)".

Jonathan KX1KIX took TWO of the kits and comments: "I thank Rex at QRPME for making the nice little "toroid holder".  makes winding these cores a bit easier. Also, as soon as I wound my toroids, I put some hot glue in there to keep them from loosening up on me.  Just cut off a small piece of glue stick and used a heat gun - they worked fine". Jonathan has a blog about building the kit, see http://kb1kix.net/blog/?p=476


Ed K9EW put his kit in a nice blue box (click the photos below). The board mounted to the right of the beacon kit PCB is a 5V regulator, which also powers a green "power on" LED. The photo on the right is an image showing Ed at 10,140,029/135 or so, on the online grabber of Bruce W1BW. Bruce is in Concord, MA (FN42hl) at a distance of 849 miles from Ed's beacon.

Stephen NM7J / HS0ZHB hopes to be the first QRSS station in Thailand.

Ken W4DU housed his QRSS beacon kit in a clear plastic enclosure, measuring 3 1/8 " X 3 1/8". He writes: "I paid about $1.00 each.  I like them because they slide apart in to two pieces for easy pcb installation and allow people to look without touching components!! Ideal for a QRP Forum when you pass the gear around."

Here's a nice screenshot, captured by Bill W4HBK. It shows three of the kits, WA8OFU at the bottom, W8BH middle and W9IUF top. 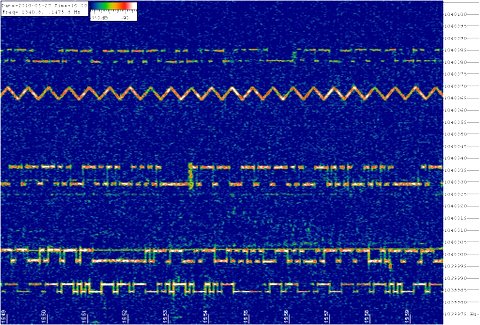 Mark G0MGX did a great job with a 40m version of the kit, see the photos below and the write-up on his radio blog: