The alert amongst you may have noticed that there was no September newsletter. However, the even more alert of you will have noted that the August newsletter was not published until the end of August, and this October newsletter is written on 4th October. So things are not as bad as they seem, it has only been around 5 weeks, not 2 months! Nevertheless going forward, I shall endeavour to be more regular and write the update at the beginning of each month!

QRP Labs has a table booked at the G-QRP club's annual convention (see details here http://gqrp.com/rishworth.htm). You can come and buy QRP Labs kits free of postage. If we run out of stock of anything we'll take your order and ship it to you, still free of postage! Or just come and chat... about the kits, radio, life, whatever!

The new receiver and polyphase kits that were launched at the end of August have been very popular! See:

The receiver kit fits on an 80 x 37mm PCB, and can be bolted in the Ultimate3S kit "sandwich" or to the VFO kit; or for fixed frequency operation, use the ProgRock kit!

The receiver kit page now has a section on suggested troubleshooting steps for those occasions when things don't work first time as planned ;-)   There is also a new section with tips on how to squeeze out the last few dB's of performance from your receiver kit.

So far, reports from constructors on the performance of the receiver have been very good. The first reported receiver completed and on air was by Phil G4JVF. The map below left shows one afternoon's WSPR reports on 40m band. Graham VE3GTC built his using surface mount resistors and capacitors instead of the supplied through-hole components. 1206 and 0805 sized components can fit easily on the 0.1-inch pitch component pads. See below right. Graham's 30m grabber and 30m WSPR reports will henceforth be using this QRP Labs receiver kit!

The next kit in the pipeline is the 5W HF PA kit. This fits the same 80 x 37mm PCB size as the Ultimate3S and other QRP Labs kits. It uses a single IRG510 and is capable of 5W across HF with 13.8V supply when driven by a QRP Labs Ultimate3S (as an example). Power output rises at lower frequencies, up to 15W on 160m. This design incorporates a number of interesting features, including raised cosine keying envelope shaping, and power control using a discrete component regulator with short-circuit protection (foldback current limiting). It's been tricky getting that all working to my satisfaction! The current status is that I am waiting on delivery of what I hope will be the final prototype PCB layout, to build and test. If that all goes well then we can start with the kit manufacture and hopefully have something more to say on this topic next month!

A Raspberry Pi has 3.3V General Purpose I/O lines (GPIO). Several people have written in asking how to interface this to the QRP Labs relay board kit. So I wrote a new article showing how to interface the Raspberry Pi (and other boards) to the QRP Labs relay board kit. See http://www.qrp-labs.com/ultimatelpf/relaydriver.html This article is accompanied by a PCB design that is free to download and use. The relays in the kit have 5V coils with 28mA current consumption. The circuit described in this article is useful for any occasions where you want to drive the relays with a lower logic level voltage (e.g. the Raspberry Pi's 3.3V logic) or where your microprocessor can't supply the required 28mA for the relay coils.

Bob ZL1RS' ocean floater http://qsl.net/zl1rs/oceanfloater.html with Ultimate3S kit onboard is still going relentlessly, albeit slowly, in the South Pacific! Now 139 days and counting! Bob's website contains a wealth of information about the construction and voyage of his floater project.

Meanwhile Dave VE3KCL launched his 17th balloon flight based on the Ultimate3S kit with special firmware that includes enhancements to send additional telemetry over WSPR. Initially it looked good, all seemed to be working well, even the GPS was fine above 10,000m. But on the 3rd day the GPS failed to start up properly. It continued transmitting but without position updates, and unsynchronised timing. It was possible to receive and decode the WSPR if you set your PC with a deliverate time offset. This way, it was possible to estimate the balloon's position very approximately by assuming the transmitter shut down when the sun is less than 15 degrees over the horizon (see north-south green lines on the map). On Day 6, the GPS booted up fine, but the balloon hit high altitude bad weather and was heading down down down... before a miraculous recovery at 3,200m, when it climbed back up over 10,000m. That evening the balloon was over Uzbekistan and that's the last we heard from it... maybe it continued flying but without the GPS, it would have been difficult to receive/decode the off-time transmissions. Who knows. Presumably by now it has landed somewhere. Flight details are here: http://www.qrp-labs.com/flights/s17.

While S17 was still flying Jim N2NXZ joined him in the air! Jim called his flight "The Brick" because of its somewhat un-aerodynamic properties. This flight uses an Ultimate3S kit with unmodified firmware. Just the standard current v3.10a firmware. The transmitter construction is interesting because Jim just hard-wired the v3.10a ATmega328 processor chip to the Si5351A Synth kit, uBlox GPS and battery, without any U3S PCB. This was to save weight. Jim's "Brick" flight is documented here http://www.qrp-labs.com/flights/brick. It flew for 3 days and crossed the Atlantic to Portugal. It hasn't been heard from since, so probably has landed somewhere. Jim plans some more flights soon! 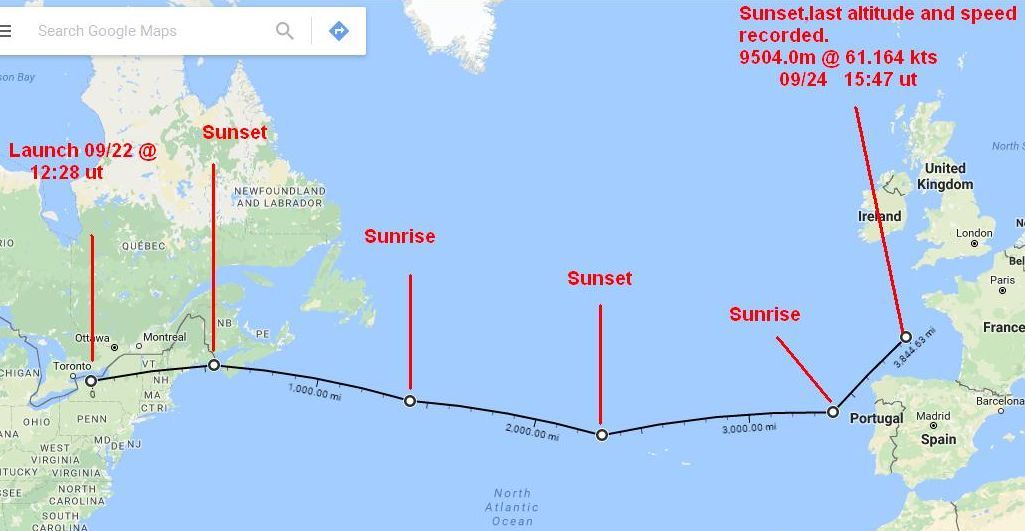 That's about it for this month. The next newsletter is planned for the beginning of November.