Like the former flights, this one also uses a special U3S firmware version.

U3S23 was launched on 08-May-2018 and rose to 9400m altitude without incident. U3S23 uses callsign G0UPL and telemetry channel 05. See below for description of the transmission schedule, which includes WSPR and Telemetry, and also the DFCW QRSS mode.

Weather projections show a southerly path over US, but some high altitude cloud systems ahead. 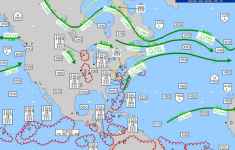 U3S23 transmitts standard and telemetry WSPR (like former flights)m and also DFCW containing the word "U3S" and the 6-character Maidenhead subsquare, and altitude. The following shows the transmission schedule, which repeats on the hour, and at 20 and 40 minutes past the hour:

All transmissions are on 20m band except for the 30m WSPR transmission at 08:. Note the DFCW subsquare here is the launch grid FN13CH and the altitude 92.8m (you have to insert the decimal point, before the last digit); altitudes during the flight will be 5 digits. Remember the 5th digit is 1/10th of a meter.

These screenshots show how the DFCW will look in Argo. 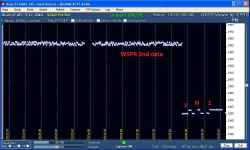 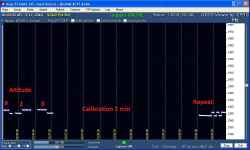 Photos of the launch

"Payload weight is 7.2g again identical to 22. Best it gets.
I had to use a base to hold it from breaking cells on the scale, so it reads higher.
Solar test was perfect...using 3 balloons as one had a hole in it."