Help Plot The Route Back Home!

Peter, G4HSO is skipper of a sailboat (Fleet ll, based in Plymouth, UK) currently crossing the Atlantic from the Caribbean to the UK via the Azores. There is a small WSPR station running an Ultimate 3S on 20m. This feeds a small mobile whip antenna mounted on the stern guard rail. It’s not the most efficient antenna! However with a sea path DX reports from Europe are already being reported.

Fleet ll is a 45 ft. sailboat (a Dufour 455). She left Tortola in the British Virgin Islands on 1 st April and is currently approximately 200 nautical miles (NM) north of BVI on a NNE course trying to catch some decent wind. If all goes according to plan she should be in the Azores around 19 th April but this is very weather dependent. She will be going against the prevailing easterly winds at the start in particular, so her course will be not a straight line by any means. They will need to sail as they carry sufficient fuel to motor no more than c.1,000 NM.

She is sending WSPR spots as G4HSO/M (more suffixes being impossible on WSPR) with 6 digit grid data and a CW /MM identifier. Location data is being uploaded to a map – see below. Spots are being received across eastern USA and occasionally into Europe, though we expect that to change as she progresses east. After the Azores she will sail back to Plymouth (ETA 5 th May) via the Bay of Biscay with a different crew. Peter G4HSO will remain as skipper throughout.

The boat is equipped with HF SSB as well as having CW and digimodes capability with an ICOM IC-7000 feeding a 40m quarter-wave backstay antenna. However as there’s a crew of just 4 to the Azores it can be busy with boat activities taking priority, so manned activity is likely to be limited.

It’s really helpful to get spots reported so if you can set up a WSPR receiver to keep watch on 20metres, please upload your spots and enter into the fun!

Fleet II arrived at the port of Horta, Azores. She underwent repairs to the steering and general maintenance and left for Plymouth in the afternoon on 24-Apr-2017. Unfortunately however the steering failed again, and they also had a split foresail so they are returning to Horta. Fleet II will be underway again once repairs are finalised.

Photos of the Fleet II

The pictures show the Ultimate3S kit in its plastic box, Fleet II herself, and the mobile whip being used for the 20m WSPR transmissions. 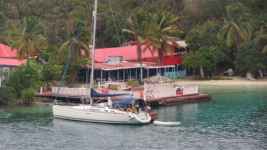 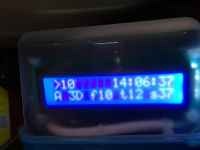 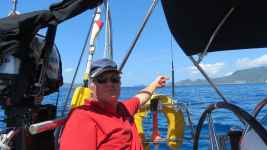 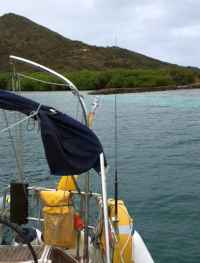 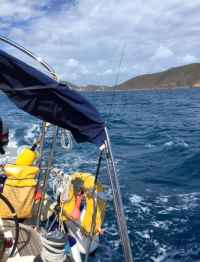